MISANTHROPOS
or The Life of Timon of Athens 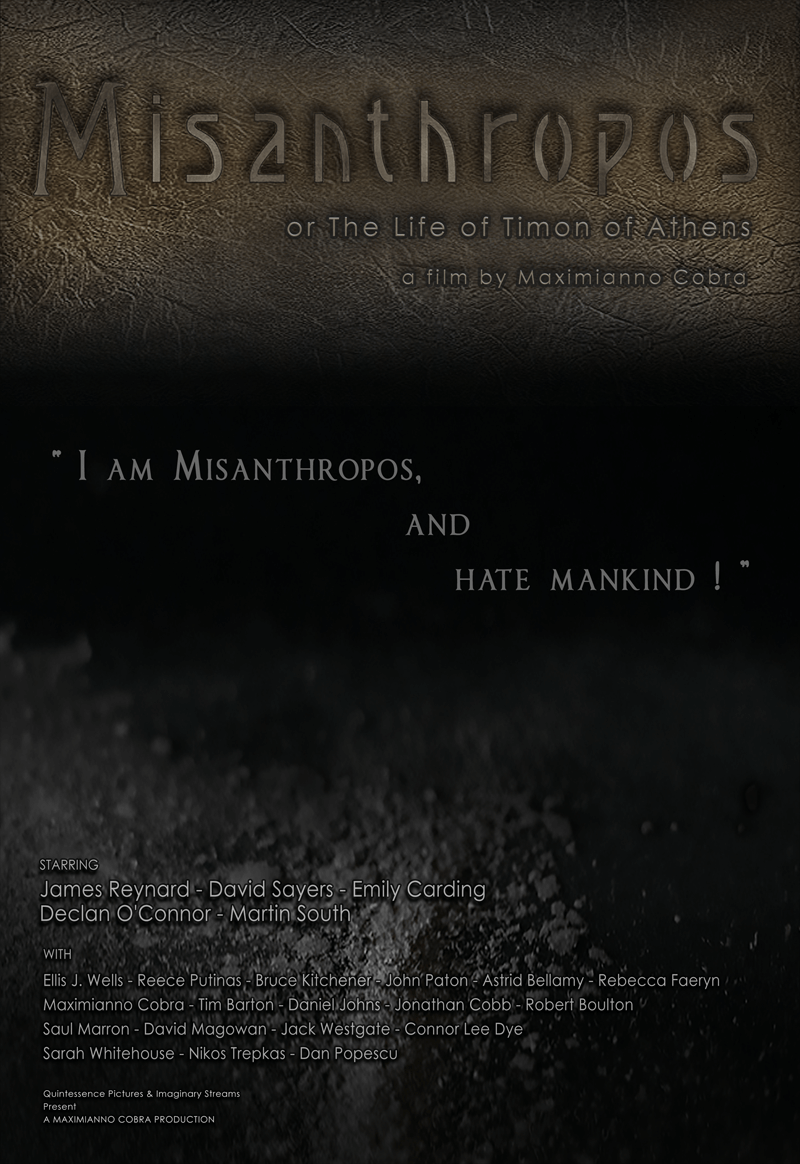 Celebrated General and esteemed nobleman Timon of Athens has spent his life and fortune generously bestowing gifts, favours, and feasting upon the citizens of Athens, both rich and poor alike. Facing bankruptcy, he seeks aid from the many false friends he has adorned with wealth, but as their generosity wanes, so too does Timon's patience for the corruption of society.

Adapted by Maximianno Cobra, from Shakespeare's "The Life of Timon of Athens", the film exposes the timeless challenge of social hypocrisy, disillusion and annihilation against the poetics of friendship, love, and beauty.

"And with my dancing soul, I’ll hold this feast in great solemnity." - "All to you, Lights, more lights!"

Celebrated General and most distinguished Grecian nobleman Timon of Athens is hosting a feast at his sumptuous villa for the leading representatives of the Athenian Council of Elders and his friends Lucius, Lucullus and Sempronius; bestowing gifts, favours and fortunes upon those in attendance.

While a battle of manners between the poetess Praxilla of Sicyon and the "nihilistic churl" Cynic philosopher Apemantus unfolds, Timon of Athens unexpectedly intervenes to provide the dowry for his servant Lucilius upon discovering he is accused of seducing a Councillor's daughter. Matters of honours settled, Timon of Athens welcomes his beloved war partner Captain Alcibiades. Before night falls Timon of Athens rewards honourable Alcibiades and his false friends with ample parting favours, blind to the truth that his wealth and fortune are now all spent.


"I do fear when every feather sticks in his own wing Lord Timon will be left a naked gull, which flashes now a phoenix."

At Timon's ancient villa, Caphis' arrival co-incides with that of Isidore and Varro's creditors; all three demanding an audience with Timon. Unable to settle such escalating debts, Timon houses and entertains the creditors, to postpone the inevitable; only to be confronted by the loyal, loving, yet exasperated Flavius, for the mismanagement of his finances. Faced at last with the undeniable ruin of his estate, Timon in desperation sends his servants across Athens to his numerous false friends, requesting their financial assistance in repairing his wounded fortune. He also entreats the Council of Elders, for whom he has performed many invaluable services as General and statesman, convinced that his generosity will be reciprocated. All deny his appeal for aid.


"Banish me? Banish your dotage, banish usury, That makes the Council ugly."

In the Council of Elder's Building, Captain Alcibiades meets the Council members of Athens to defend a friend and subordinate, accused of manslaughter. Despite strong oration in favour of his comrade, weighing long service against momentary failings, the Council decree Alcibiades' friend is to be executed. Raging upon the unmovable interaction of the Council, Alcibiades is banished forthwith from Athens on pain of death. Understanding at last the true hypocrisy of usury in their rulings, Alcibiades gathers his forces, determined to scorch this poisonous root from Athenian society.


"His promises fly so beyond his state that what he speaks is all in debt, he owes for every word. He is so kind that he now pays interest for't."

Back at Timon's villa, the creditors have lost patience in waiting. Despite Lucilius best efforts to distract Caphis and his ilk, the creditors confront the emotionally wounded Timon of Athens. With no wealth left to subdue their patience, Timon rages in futility against their vulturous motives and thrusts them from his estate. His patience for the corruption in society that has bled his fortune and kindness dry, yet given nothing in return has brought him to breaking point. Bitterly Timon conspires to hold one final banquet for his false friends, one final revenge upon the world that has so cruelly drained him of his humanity.


"For these my present friends, as they are to me nothing, so in nothing bless them; and to nothing are they welcome.- Uncover, dogs, and lap."

Arriving at what they expected to be a grand Grecian feast laid out in Timon’s splendid dining room, Lucius, Lucullus and Sempronius joyously celebrate Timon and lament their inability to help him with his former financial woes. These niceties are cast aside by Timon, as he welcomes the Gorgon to serenade his guests with a warlike song. An uncomfortable sense of foreboding rests upon the feast, as Timon unmasks his friends for the villainous parasites they are at their core. Outraged at this affront the false friends depart, and Timon is left alone. Wandering his ransacked villa, bankrupt, broken in spirit and cursing the Athenian leprosy of society, Timon disrobes and exits into the wilderness of the night.


"Poor honest lord, brought low by his own heart, Undone by goodness!"

With their master gone and the estate destitute, Flavius and Lucilius pack up the ruined house for closure. Joined by Praxilla the three servants lament their fallen master's kindness, and the ruination of his once noble house. Unable to reconcile the brutality of his master's fate with the justice of conscience, Lucilius departs their company. Flavius and Praxilla embark on a search for their beloved master.


"I am Misanthropos, and hate mankind."

Timon, of Athens no more, is living in absolute poverty in a small hovel under the ruins of a Grecian temple. The trumpets sound, heralding the arrival in the surroundings of the ruins of the now renowned General Alcibiades accompanied by his close entourage including his trusted soldiers, Phrynia and Timandra.

After a difficult reunion and realizing the drowned wits of his friend are beyond help, Alcibiades departs to lay siege to the corrupt city of Athens, keeping behind two soldiers to guard Timon in his hidden place as well as Phrynia and Timandra who, intrigued by the awkward situation, decided to stay.

Timon is changed, and now his generosity has inverted, turned on its head and he cannot bare to part with his fortune again. His rudeness and extreme bitterness lure away all those who have stayed.


"The middle of humanity thou never knewest, but the extremity of both ends."

Arrive Apemantus, who has heard of Timon's fate and comes to gloat. He takes pains to reiterate how far Timon has fallen, holding up a bitter mirror of truth to the reality of Timon's actions, life and generosity. Taking pleasure in bringing discomfort and discontent, Apemantus departs with a perverse, ill-concealed sense of satisfaction.


"My best beloved and approved friend, All that glitters is not gold."

Time passes and Timon’s vulnerability increases. Flavius and Praxilla, having searched for their beloved master, stumble upon his hidden place. Timon's mental state and physical tiredness has deteriorated and he starts losing cognitive functioning abilities. Flavius feels most powerless, he is broken to see how far his master has plummeted, and yet stands by him to the very end.


The three representatives of the Council of Elders, led by Flavius, try to convince Timon to return to Athens, as the great statesman he once was, to prevent Alcibiades’s imminent attack. Timon repels them without appeal.


"Sound to this coward and lascivious town our terrible approach."

Dawn. Alcibiades approaches Athens on horseback, his vast army following behind; and with a rallying cry brings the full force of his power upon the city. Defeat is inevitable and the Councillors of Athens come to the balustrades to offer surrender, which Alcibiades accepts.


"Here lies a wretched corpse, of wretched soul bereft. Seek not my name. A plague consume you wicked caitiffs left!"

Occupying the city with his forces, he sends for Timon, now having drained the poisonous clouds from the city, he is confident his dear friend will be returned to his right mind. But it is too late. Timon has died, unable to cling to a world he despises. Alcibiades will honour his dearest comrade at the temple, and install justice across the city, putting on trial all those who allowed their corruptive nature and selfish existence to bring shameful ruin upon Timon of Athens.


You still shall live - such virtue hath my pen - Where breath most breathes, even in the mouths of men.

(A name given to) a person who displays characteristics reminiscent of the semi-legendary misanthrope Timon of Athens (also called Timon Misanthropos); a misanthrope.